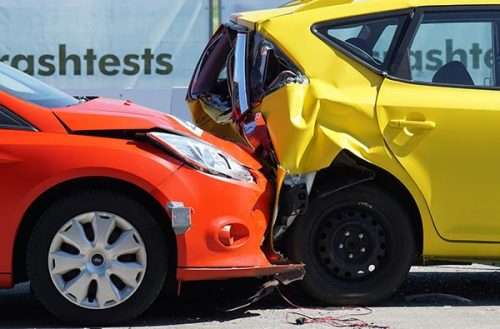 It’s a lovely day out and all is good in your world! Then the unexpected happens, you get involved in a collision. Just when you thought you were a great driver, how could this happen? It’s time to get some car collision education!

No one is immune, as car accidents in the United States are more common than you might think. What is unfortunate is that the majority are caused by simple human error that could be prevented. The best way to handle an emergency car accident is to empower yourself before it happens. No matter how experienced you are, you are going to be shocked, possibly dizzy with adrenaline or enraged at the person that caused it.

It’s important that you mentally train yourself to understand the basics with some car collision education. We all know how to be safe and when we get behind the wheel, you trust yourself and other motorists on the road to drive carefully and defensively to prevent accidents. Unfortunately car crashes do still happen. Try Not To Learn Safety By Accident!

Let’s take a moment and chat about the logistics of how and why. Here is a breakdown to help you be your own fist line of defense.

The Theory of Collision

Believe it or not, one of the most common times for car accidents in areas who have time change is after Day Light Savings Time begins. It is unclear as to why these accidents occur more often. Rumors point to sleep deprivation due to the time change and the unfamiliar darkness in the mornings as possible culprits.

Changing lanes too fast, not watching where you’re going, and pulling out into traffic without stopping at a stop sign are all examples of reckless driving that commonly lead to accidents. Acting aggressively when driving is also one of the leading causes of reckless driving and is why it’s so important to keep calm when you’re behind the wheel.

Distracted driving can be anything from fiddling with the radio to talking on your cell phone and from eating to fussing with the kids. Studies show that distracted driving is getting worse every year and is responsible for many car accidents on the road, some of them fatal. It is important that you pay attention only to your driving and the road, not your friends, phone, or children. If you have to do any of the above, it’s best to pull over, take care of the problem, and then get back on the road to your destination.

Even with the commercials, the news, and other ways of getting the word out there about how dangerous drinking and driving is, drunk driving is still one of the leading causes of car accidents and is still the most deadly. If you must drink, please designate a sober driver, take a cab, ride share, or stay where you are instead of getting behind the wheel. Lives, including your own, may depend on it.

While most drivers know that swerving into oncoming traffic to miss an animal that has darted into the road is a bad idea, it’s a natural instinct to try to stop from hitting another living thing. There are animal crossing signs in some areas, especially those that have a large deer population. If you see one of these signs, slow down and be alert.

The Physics of a Collision: Energy & Force

Car crashes are clear examples of how Newton’s Laws of motions work. Sure we would much rather eat fig Newton’s then talk about Newton’s theories… But, we need to understand that an object in motion will stay in motion unless an external force acts upon it.

Conversely, if an object is at rest, it will remain at rest until an unbalanced force acts upon it. IE: YOU HIT SOMETHING OR SOMETHING HIT YOU!

What is the difference between hitting a wall or a car?

If the cars are identical, both cars will end up standing still. In a case of head-on collision is like hitting a brick wall at 50 mph. Broadly speaking its because when you hit a wall, pretty much all the energy goes into deforming the car. The wall does not significantly change. The average vehicle on the road today weighs between 3,200 lbs and 4,100 lbs.

So for example: A 3,200 lb vehicle traveling 30 mph will collapse one foot upon impact, 60 mph would collapse two feet upon impact.

LET US JUST FOR A MOMENT, DISMISS THE MYTH THAT CAR CRASHES ARE ACCIDENTS. SOMEONE HAS TO MAKE A MISTAKE.